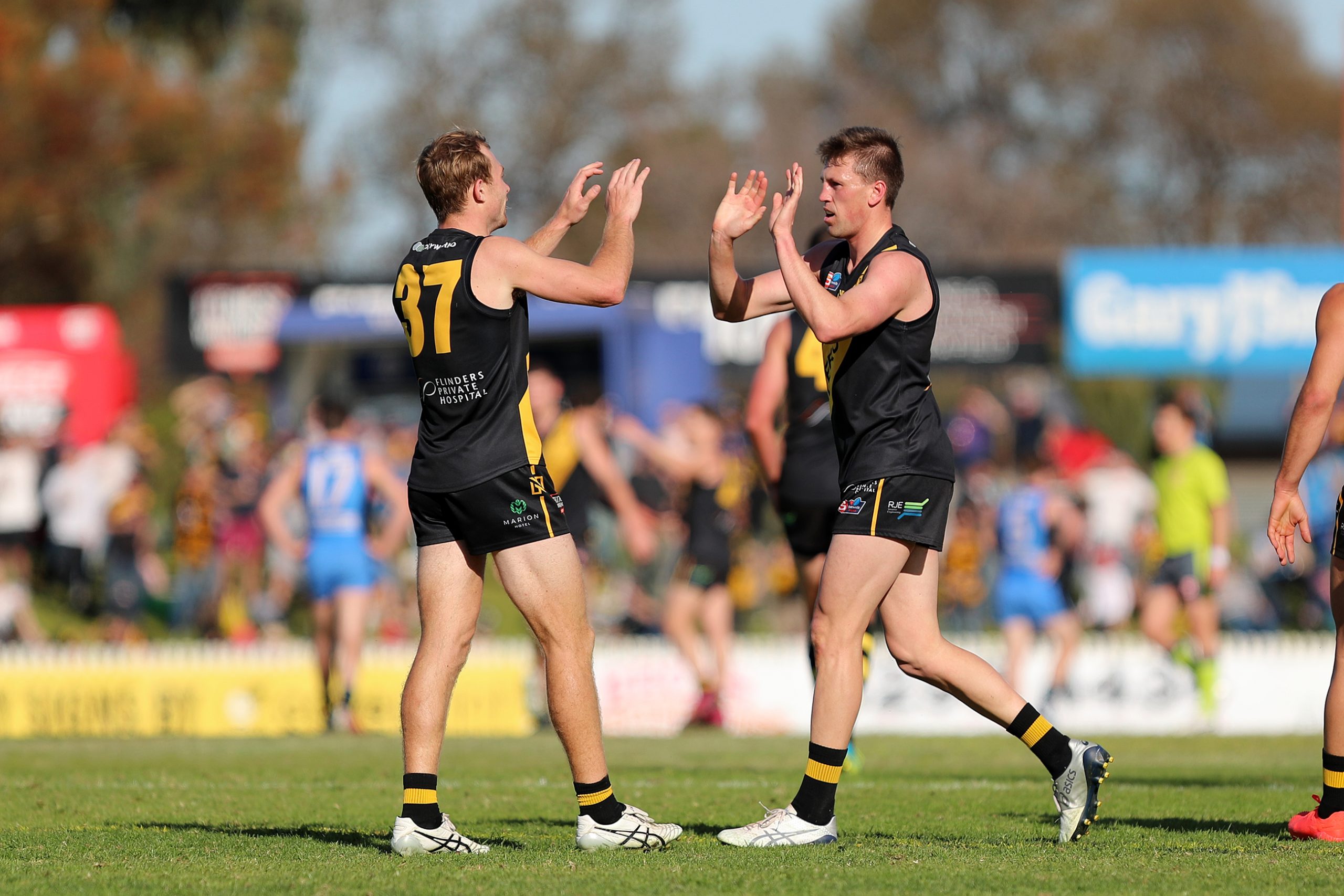 Glenelg flew the flag in more ways than one as it kept its premiership defence alive with a much-needed 18-point win against a dogged Sturt at ACH Group Stadium.

Forced to wait until August 2 to unveil their 2019 premiership flag in front of the Brighton Road faithful, the Bays didn’t let their supporters down after being drawn into tense tussle after quarter-time.

Retired premiership best-and-fairest Jesse White unfurled the flag before the first bounce and it appeared to ignite the Tigers as they started brightly with the first four goals of the game.

Keeping the Double Blues to just one behind at the first change, Glenelg’s key indicators were all in positive territory as it led the inside 50m count 13-5 and marks 25-15 while also having 21 more kicks and 17 more handballs in the first half-an-hour.

The hosts appeared well on top when they began to transfer their general play dominance onto the scoreboard with the opening goal of the second term.

Tiger forward Darcy Bailey handballed nicely into space for Luke Reynolds, who tucked the ball under his arm before delivering it precisely to inclusion Jack Yates, who kicked his first Statewide Super League goal with an impressive finish on the run from 25m.

But any thoughts of a party to celebrate their occasion were quickly put on hold as Sturt coach Nathan Grima swung the changes to inject life into the contest.

South Adelaide recruit Abe Davis, previously stationed deep in attack as a key forward, was moved into the centre square while bigman Daniel Fahey-Sparks was used chiefly inside 50m as late Werribee recruit Darcy Bennett made his debut in the ruck.

Not only did Davis begin to win clearances, Fahey-Sparks proved to be a handful for the Glenelg defenders with his strong contested marking overhead.

The pair combined to trim Glenelg’s advantage to just seven points when Davis put a long ball deep into the pocket for Fahey-Sparks to mark and snap truly for his second major of the term.

Despite leading by as much as 26 points after Yates’ goal, the Tigers suddenly led by just a goal entering time-on of the second stanza.

Sturt’s surge was a sign of what was to come as each time Glenelg threaten to break clear with a three-goal buffer, the visitors would work hard to peg the margin back.

But Magarey Medallist Zane Kirkwood soon impacted the match by taking a chest mark back with the flight of the ball before snapping from close range.

Once Sturt’s former skipper provided a goal assist to teammate Casey Voss, who goaled on the run from 40m, the Double Blues trailed by just four points 12 minutes into the last term.

Tiger wingman Carl Nicholson turned an important two-on-one contest his team’s way with a spoil which sparked an outer side attack which involved Yates and Bailey before ruckman Jack Hannath marked on the lead.

The former Fremantle Docker calmly kicked his 40m set shot from a slight angle to give his side a 10-point breather.

It became 18 points when Tiger Billy Stretch made the most of a free kick for holding the man by booting his 25m set shot in front.

Sturt still came when Steven Slimming turned and snapped in one motion to kick a clever goal in the 24th minute but the Tigers would eventually salute after McBean bagged his fifth major for the day after snaring a loose ball at the back of a boundary throw-in.

The Tigers had input from a wider spread of players, led by the ultra-consistent Matthew Snook who had 29 disposals, five tackles and nine clearances.

Premiership captain Chris Curran made a very welcome return to the line-up to collect 25 disposals and nine marks, many of which cut off Sturt’s forays forward, as did current skipper Max Proud with 18 touches.

Former AFL-listed pair Billy Stretch and Matt Allen also played important roles for the Bays, Allen having 15 disposals by the main change before finishing with 20 as Stretch booted the sealing goal to go with his 19 disposals.

Contributions from lesser-lights would have pleased Tigers coach Mark Stone, with Callum Park – 13 disposals – standing tall in important moments late in the game.

Playing his first League game of the year, Yates -13 disposals and a goal – was clean with his disposals while proving to be a vital link in multiple scoring chains.

Sturt ball magnets James Battersby and Sam Colquhoun not only had 28 disposals each but 18 clearances between them to ensure their team would boast an overall advantage of 43-34 in that category.

Davis did well to tally 26 disposals and five clearances given he was rarely sighted in the first term, when the visitors lost a rotation as defender Rory Illman injured his hamstring.

Slimming won crucial 50-50 balls for Sturt while tallying 20 disposals, four tackles and five clearances as Voss and Kirkwood also hit the scoreboard as they booted four goals between them.

Fahey-Sparks finished with 2.2 and nine marks in a breakout performance, with the regular ruckman potentially finding a new home deep inside 50m.

The Double Blues now have a 2-4 win-loss record in sixth place while the Tigers move to 3-3 just outside the top four on percentage.