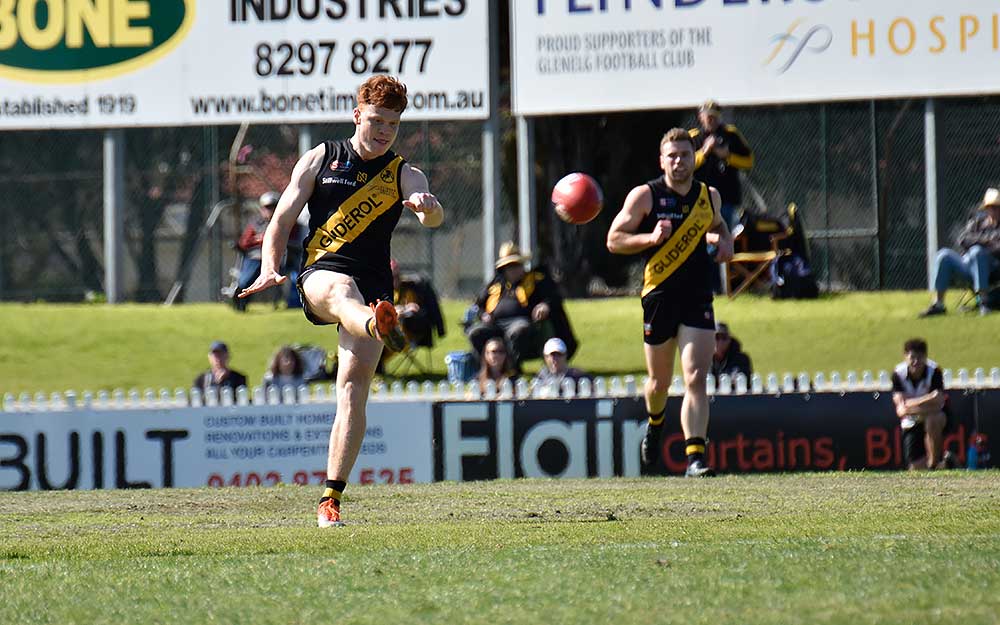 There wouldn’t be a Glenelg player who epitomises the Tigers’ ”All-In” trademark better than Brad Agnew.

Whatever needs to be done for his team, Agnew is one of the first to roll up the sleeves and perform his role to perfection.

The 27-year-old displayed this in noticeable fashion throughout the 2019 Statewide Super League finals series, where he was one of the Tigers’ strongest players throughout September.

Finishing in the competition’s top-10 for total tackles at an average of 6.5 last year, Agnew laid a staggering 34 in three weeks to help propel his side to its drought-breaking premiership win.

And it was his best-on-ground display in the Preliminary Final against Adelaide which ensured the Mount Burr product would land in the Statewide Super League Top 50.

Going head-to-head with Adelaide’s AFL-listed midfielders, Agnew produced a masterclass from the centre square to finish with 27 disposals, 10 tackles and eight clearances with his team’s season on the line.

Glenelg premiership coach Mark Stone doesn’t hesitate when he declares Agnew to be one of his most reliable players and it seems his teammates agree after he took home the club’s Player Trademark Award in 2019.

While he thrived in the midfield last year, Agnew can also be used in defence where he could take on the role vacated by premiership captain Chris Curran, who is spending this year working in the Riverland.

Form across the 2019 season was used as a significant factor in the selection process, with those winning awards such as best-and-fairests, being selected in State squads and leadership groups also looked upon favourably.

Recruits to the Statewide Super League have also been included, with significant AFL experience another element in deciding the order of players.